The famed luxury department store, Nieman Marcus, commissioned an original sculpture from Steve Turnbull to be placed in their first ever store in Hawaii. Steve and his work were featured in the In Circle Magazine, a publication of Nieman Marcus.

As this publication is no longer available, we’ve re-printed the article for our archives. 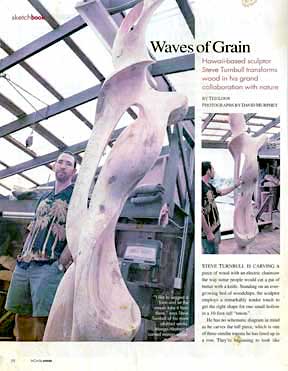 STEVE TURNBULL IS CARVING A piece of wood with an electric chainsaw the way some people would cut a pat of butter with a knife. Standing on an ever-growing bed of wood chips, the sculptor employs a remarkably tender touch to get the right shape for one small hollow in a 10-foot-tall “totem.”

He has no schematic diagram in mind as he carves the tall piece, which is one of three similar totems he has lined up in a row. They’re beginning to look like monumentally rendered wisps of smoke. “I’m totally wide open to anything that comes along,” says Turnbull, a soft-spoken guy who plans, as he works, with ideas tumbling out and turning into forms before they have a chance to be second-guessed.

The setting is certainly conducive to letting the good vibes flow—Turnbull’s studio on the remote northern coast of the Hawaiian island of Maui is perched high on a mountain and framed by the cobalt blue panorama of the Pacific Ocean. To get there, you have to drive on a stretch of one-lane road along a steep cliff where the “Falling Rocks” sign isn’t only a threat, it’s a promise. The blind curves of the road provide a sneak preview of some of the remarkable shapes in Turnbull’s art.

Surprisingly, most of his business comes from tourists who are taking the long way around the island. “Most people who come and buy our art don’t even know we’re here,” says Turnbull, who is wearing a Kapalua Bay baseball hat to block the strong Hawaiian sun.

His use of “our” and “we” is typical—he shares the studio on a picturesque two-acre property with his uncle, Bruce Turnbull, another sculptor who has lived and worked there for 30 years. Inside Bruce’s house, which doubles as a gallery for visitors on Tuesdays and Thursdays, it’s hard to tell where one artist’s work ends and the other’s begins. What began as a student-teacher seminar, with Bruce giving guidance, has evolved into an artists’ colony of two.

For Steve, a Seattle native, the art history courses he took at the University of Washington left him relatively cold. “I was mostly inspired by what my uncle was doing here,” he says, recalling his visits to Maui as a young man. “I just couldn’t wait to get back here and get into it full time.” Come back he did, a full 15 years ago now, and he continues to set down roots. Turnbull is building a house for himself, his wife, Christine, and their 2-year-old son, Gunnar. (They currently rent a house just down the road.) The new home will stand just across the property from the studio.

Though he occasionally works in stone, Turnbull’s free-form approach to sculpture works best in wood. “Going out and finding something that speaks to me is the most important part of the process,” says Turnbull of the care he takes in selecting raw wood.

Regular logs are the worst—the plain Jane shapes don’t fire his creativity. Old, gnarled stumps, many provided by the government when trees are cleared for highways, are prized. “I don’t necessarily see the image that I’m going to carve,” says Turnbull, “but I see potential.”

When he falls in love with a piece of wood, nothing stops him from getting it to his studio, not even the rough terrain of the surrounding Maui Mountains. “Often it’s 10 miles back from the road with no access,” he says. “We’ll use a helicopter if it’s a big, awesome tree.”

He often fashions works from driftwood as well, but Hawaiian trees don’t have the right consistency once they’ve gotten wet. So Turnbull hunts for hardwoods in the Pacific Northwest. He picks these up on twice yearly trips to see family in the Seattle area. Fishing boats replace helicopters as means of getting the wood to a safe haven.

Once the piece is selected, Turnbull roughs out the sculpture’s form with
chainsaws, disc grinders, and drills, moving from larger tools to smaller ones. “We’ve got three or four of each tool in there, because we wear them out so fast,” he says. Finally, he sands the sculpture and seals it to bring out the grain of the wood.

Over the past decade, Turnbull has fashioned many pieces with recognizable forms. Giraffes are favorite subjects, since their elongated bodies provide a starting point for the vertical contortions he favors. But the works closest to his heart are the more abstract ones.

His largest public commission to date—“Kahula O Ke Kai” Dance Of The Sea, 1998, a dynamic swirl of a piece made from a native Hawaiian wood called Ohai—represents the most significant evolution of this trend. It was created for the Neiman Marcus Honolulu store, and the title translates as Dance of the Sea. You don’t have to be standing in the studio with Turnbull and looking down at the wide expanse of ocean to see waves in his work; each sculpture seems to undulate in some sense.

The way that driftwood bobs along, delivered on shore only when it’s good and ready, is emblematic of the way the artist gets his inspiration. “You never know where it will come from,” he says. “It’s a true collaboration with nature.”

Charm of a Road Less Travelled

The Art Of “New Beginnings” For The Coming Year